You won’t have Ricky to kick around anymore….

Apparently the Hollywood Foreign Press realized that they didn’t have to bring back Ricky Gervais.

But seriously, this is great. 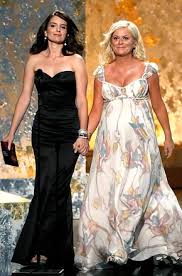 The golden goddess of comedy

EW reports that Fey and Poehler will co-host the 70th Golden Globes that will air on January 13 on NBC.

The duo are not only long time friends, having been in Second City together, but they co-hosted SNL‘s Weekend Update together for 2 seasons, and have co-starred in movies together.

This is clearly a match made in heaven.

What is interesting is how this has turned out to be a big year for TV stars hosting award shows that aren’t necessarily about TV. First Seth MacFarlane is hosting the Oscars, and now this. Considering it’s not a stretch to say that some of what is on TV is rivaling anything on the big screen, perhaps this isn’t such a shocker.