So now Stewie Griffin will be hosting the Oscars?

Seth MacFarlane, father of Peter Griffin, Clevland Brown and Roger the Alien will be hosting this year’s Oscar ceremony on February 24. 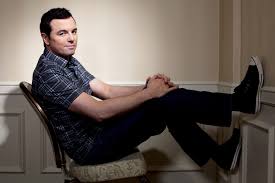 Your Oscar host ladies and gentleman

EW reports this with same sense of “huh” as the rest of us:

God help us, who ever thought we’d be seeing THOSE words all put together?

This is an interesting choice for many reasons, the biggest of which is that MacFarlane is primarily associated with television, not film. (His summer hit Ted notwithstanding.)  Recently, the Oscar hosts have usually been stars with solid movie credentials. Thinking back to a television only host – David Letterman – is not terribly encouraging.

Add to this the fact that I’m not sure how familiar most of the older members of the Academy are with Seth MacFarlane. I’m sure many of them are hearing this news and looking at the name and face blankly, trying desperately to figure out exactly which movies he has starred in. Remember…he was only a voice in Ted…

But all that being said, MacFarlane can probably react pretty quickly on his feet. He managed to poke fun at himself during the Emmys when he went to the wrong microphone. So he might give us an entertaining show. Plus he can sing. And I think he can sing rather well. Much like Matt and Trey who manage to infuse South Park with as much music as possible, MacFarlane loves a good song, especially a pastiche to his favorite songs of the Rat Pack era or Broadway hits.

I suppose he won’t be as disengaged as James Franco and will probably give us at least one “WTF?” moment, so that’s something.

Personally I’d rather just have him let Roger from American Dad host the entire thing and be done with it.

1 Response to So now Stewie Griffin will be hosting the Oscars?