So many remakes that are unasked for. Were we really writing letters for a Total Recall or The Women or The Ladykillers for today’s world? For every Ocean’s 11, we get 20 Blues Brothers 2000. 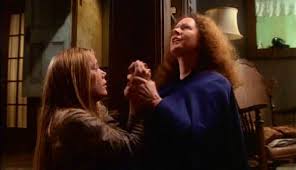 Praying to god because of the dirty pillows

But this one is a bit of a head scratcher. The original Carrie, based on the book by Stephen King (his first novel to be published) is one of those really great horror flicks. The movie itself was actually nominated for two Oscars (Best Actress and Best Supporting Actress). Sissy Spacek’s ethereal innocence belied something much darker and more sinister. And Piper Laurie as her mother was all fire and brimstone, and really pure insanity until the very end. Her death stuck with me for a very long time.

And the film features one of the most iconic prom sequences in cinematic history. The image of Spacek at the prom, blood streaming down her hair, her dress, her face, her eyes saucer-sized in fear and shame. It is at once frightening and in the context of the movie, so so heartbreaking.

She is going to make them all burn

Sure there was an awful sequel that had nothing to do with the original (The Rage: Carrie 2) and then they made that terrible television version with Angela Bettis who was much better served by the uber-creepy film May. But no one took either of those seriously.

However, there is an actual remake headed to theaters that seems to be more than just an attempt to make more money. The film is being directed by Kimberly Pierce who made a big splash in the 90’s and won Hilary Swank her first Oscar with Boys Don’t Cry. And then casting Chloë Moretz  who is developing quite the bloody resume (Let Me In, Kick-Ass)  as the titular character and Julianne Moore – playing against whatever her amorphous type is – as her religious fanatic mother, I am starting to think that this Carrie might not be something to just brush off.