Moonshine River or the Simpsons forgets its past (updated)

I know I swore I’d stop watching this. I’m not even hate watching it like I do with Glee. I watch every new episode, knowing how terrible it will be, but in the depths of my despair,  I hold onto hope that one day the show I love will return. And yet, I’m always disappointed.

No more so than with The Simpsons season premiere.

The plot, as always these days, is besides the point. Bart wants to prove that a girl will love him so he tracks down all his past girlfriends to ask them if … and oh my god I’m boring myself as I type this. But the point of the plot is that it leads the Simpsons family to New York. And they’re all gung ho to head to the Big Apple!

But ay, there’s the rub. Because the Simpsons family has already been to New York in the classic “The City of New York vs Homer Simpson.” ‘Member that? They took the Sit-N-Stare Bus line and didn’t pay the extra $1.50 for a bathroom? That brilliant episode that saw Homer stuck between the Twin Towers, eating khlav kalash, drinking crab juice, dreaming of Flushing Meadows. The episode that saw the creation of the musical “Kickin’ It” (pardon the crappy video below):

And if we remember correctly, as the rest of the family had a magical day in NYC, Homer ends the day with a car damaged by a boot, no windshield, behind a garbage truck with refuse and used needles flying in his face. When the kids ask if they can come back, Homer responds through gritted teeth “We’ll see.” Most people wouldn’t assume that was a promise so much a vow to never set foot there again.

Yet we had this episode.

I understand that in this world of cartoons, everything resets at the end of the episode, with very few exceptions – Lisa being a vegetarian, Maude Flanders dying… But every so often you think that there has been something so iconic that the show would remember it and not 100% rewrite its own history. And that is exactly what happened this weekend.

Apart from the khlav kalash callback, there’s nothing to show that the current writers are aware that the show has a past. [updated to add] The entire plotline of Marge and Lisa trying to find affordable culture in NYC is exactly what happened before. They just replaced “I’m Checkin’ In” with Shakespeare in the Park. And with lesser results, I might add. Just compare that song above to a very very lame joke about the Baldwins vs the Sheen-Estevezes. No comparison. To quote South Park, “The Simpsons already did it!”

Think back to “The City of New York vs Homer Simpson” and think about this episode. Homer wouldn’t stare happily at Times Square! He was robbed and taken for a fool there! 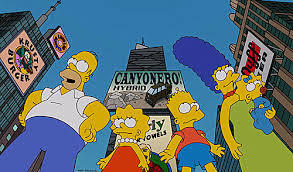 I cry SHENANIGANS at this scene!

And it galls me. Sticks in my craw. Just pisses me off.

So will I stop watching? Alas, no.

Much like Homer and the sandwich, how can I be angry at you, Simpsons? You may give me the television watching version of food poisoning, but you are my sandwich and it would seem I’m sticking with you till the bitter end. Mold, fungus, botulism and all.

Here’s hoping next week’s Treehouse of Horror will redeem itself. 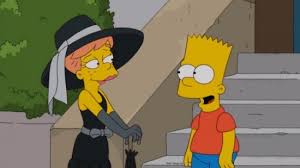 (I didn’t think Zooey Deschanel’s guest voice and the entire Breakfast at Tiffany’s spoof was worth more than this footnote mention.)