Girls Season 2 – Where are they going?

The finale of the first season of Lena Dunham’s Girls on HBO ended with possibility:
– Jessa has a surprise wedding
– Marnie, trying to show she’s over Charlie, hooks up with Drunk Uncle
– Shoshana loses her virginity to Ray, a given after their heart-to-heart while she was on crack in Bushwick
– Hannah manages to break up with Adam without realizing it, then falls asleep on the train and ends up in Coney Island sans purse but with a slice of wedding cake.

As Tom Petty sang, the future was wide open.

But from the first 2 episodes of season 2, we see that it is not actually wide open so much as  merely widened.

One of the things that has made this show so painful and real is that the situation that these “girls” find themselves in isn’t so far from the truth that many of us have lived. Of course everything has been heightened for TV, but the core of these experiences are brutally honest.

Marnie in her pretty person uniform

Marnie starts the season by being fired. Wait, by being “downsized” by a boss who can’t even remember to go through with the “downsizing”. Her boss’s flippancy paired with the revelation that her boss can’t fire the other guy because she slept with him and could be sued for sexual harassment makes the entire process that much more embarrassing.

In the second episode, Marnie interviews with another art gallery owner, played by Dunham’s mother, artist Laurie Simmons, who tells Marnie that she really doesn’t see her in the art world. There is nothing more devestating than being told you don’t fit into the world you have deemed you future.  After a bizarre conversation with Shosh and Ray who are in bed together discussing bathing pigs, Marnie decides to make “pretty person” money as a hostess at a hot restaurant (or club, I wasn’t quite sure).

I don’t know what Marnie’s path will be for the rest of the season, but I cannot imagine this pretty person high will last much longer. And if it does, Marnie is much shallower than I gave her credit for. 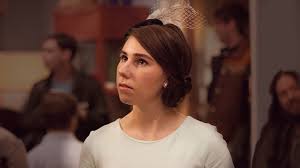 Speaking of Shoshanna…after cursing him during her morning affirmations, she and Ray hook up in the first episode and in the second episode seem to be in the middle of couple bliss. Shosh’s pillow talk is pretty much what you would expect – talking about her time at summer camp. I grew up with many girls just like Shoshanna, sheltered and unaware of the real world that is one or two bad choices away. Luckily, most of them never made those choices and are now having their own conversations about summer camp and bathing pigs. Shoshana doesn’t strike me as the sort of character who wants her world much bigger than it already is and can exist contentedly in a world of her own choosing.

Should we be calling Jessa a Real Housewife?

Despite having married in haste and honeymooned somewhere she got cornrows, Jessa has barely changed. Sure, she seems wiser and more knowing, but only to Hannah who doesn’t know any better. When Hannah complains about her new beau, Sandy, not reading her essay, Jessa is completely Jessa-esque when she announces that Thomas-John looks at her paintings as soon she shows them to him. It is telling for both Hannah and Jessa that neither sees that statement as preposterous.

And as for Hannah? As lost as she was at the end of season 1, she is equally lost now. But maybe without as much cake…

Hannah is so desperately trying to get it together and just can’t. She is dating Sandy, a black Republican played by the wonderful Donald Glover, who loves how weird she is, but doesn’t really respect her as a writer. She is living with her gay ex-bf, Elijah, who himself is a total and unmitigated mess having slept with Marnie to prove to himself that he’s bi and then broke up with his sugar daddy George who wasn’t having any of that. Hannah is still helping Adam as she feels responsible for his injury at the end of season 1 and even though she spent all of the first season trying to make Adam her boyfriend, the moment he commits, she runs the other way. She is so confused she even calls the cops on Adam without really thinking about the repercussions.

Slight spoiler if you haven’t seen the second episode yet: 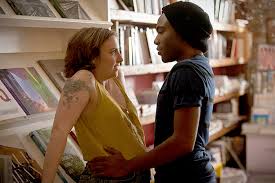 Hannah and her Republican

When she and Sandy break up I don’t know if I was supposed to really be feeling something other than Hannah’s inability to articulate what her real issue was. She used Sandy’s political leanings as a crutch, when in actuality she just couldn’t handle being with someone who didn’t tell her what a great writer she is. It is not easy to admit that type of need to oneself and Hannah is in no way strong enough to vocalize it to herself, let alone the guy she’s been seeing. So she begins a rant on gay rights, women’s rights, reverse racism, anything but the truth.  I imagine this was a fairly honest scene for Lena Dunham and a plus one for the whole Missy Elliott portion of the discussion.

All four of these characters (five if we count Elijah and we really should because Andrew Rannells is just the best) are people on the verge of becoming someone, formed but still unformed enough to be made too malleable by circumstance and outside influence. It is painful to watch sometimes because to some degree we’ve all been there – unsure of who we are and what we want, where we are going and how to get there. The future is laid out in a seemingly endless variety before these characters and each choice they make narrows those choices. As you get older, it is that narrowing that can haunt you.

Where do they go from here? We are only 2 episodes in so that is still a very open-ended question, but with each episode it will hopefully become clearer what those eventual paths will be.

And of course, a lot more super awkward sex.

2 Responses to Girls Season 2 – Where are they going?