Should we be worried about Seth Macfarlane hosting the Oscars? 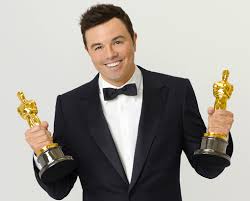 The answer to that is a resounding…maybe?

And that maybe is dependent on a few of things.

1. Do you like Family Guy and American Dad? (I’m not including The Cleveland Show because, let’s face, it is the clear dud of the three)

If you do, then chances are you’re more amenable to Macfarlane’s humor and therefore probably going to enjoy his hosting gig more. Of course I am sure that his monolog will be a bit more family friendly than the majority of the humor on Family Guy, but there is an attitude to his sense of humor that will come through. If you hate his shows, chances are, you’ll hate his hosting.

Not sure how you feel? This scene caused quite the stir when it aired and is a decent litmus test.

Note: it is worth seeing the whole episode, as this is wildly out of context.

2. Do you believe in the sanctity of the Oscars and believe this to be the one night a year that Hollywood should take itself seriously?

A lot of people seemed very bothered that during the nomination announcements, Macfarlane wasn’t reverential enough, that he seemed too jocular and disrespectful. I’m of two minds on this one:

The general consensus is the reason that everyone loved Billy Crystal because he was one of them and he did the funny while still giving the night the honor it deserved. However, based on last year’s lackluster performance, Crystal isn’t really all that funny anymore. He’s definitely not “edgy” enough to bring in the younger demo that the Academy and ABC is dying for. James Franco was clearly a bit too out there and I do suspect Seth Macfarlane is a bit much as well, but the night can be a bit too pompous without someone  deflating it just a little.

My guess is Macfarlane will be more like Ricky Gervais hosting the Golden Globes, minus the accent, the booze, and grudging respect of the audience (at least during Gervais’s first year).

Yes. But that might work for him. A total and complete belief in his own abilities might play nicely or at least prevent him from crumbling once things start going south. Though too much smugness can become grating quite early in the evening and turn off viewers before we even get that far into the awards.

4. Can a host sink the evening?

A mediocre host can have a minimal effect on the night – a monolog with one or two mild chuckles and then a slew of unmemorable interstitials. A great host can keep the evening going, start it off with a monolog that everyone will be quoting the next day and enliven even the most boring of presenters.

A terrible host is something special. How much do we love a nice bit of schadenfreude? There is nothing quite like watching someone crash and burn over and over again. The flop sweat. The stammering. The piercing silence in the auditorium. On the down side, a terrible host is terrible. But on the plus side? A terrible host is TERRIBLE.

So where does this leave us with Macfarlane? As someone who enjoys his shows, I’m willing to give him the benefit of the doubt. His lifelong love of musicals and Frank Sinatra-type crooning indicates a higher level of taste than just fart jokes. And even though his comedy stylizing in the promos below are a bit touch and go, I am not wholly convinced the evening is going to be a disaster.

Worse comes to worst, we’ll all just mock him mercilessly on February 25th.

1 Response to Should we be worried about Seth Macfarlane hosting the Oscars?