Golden Globe Noms Are In…

Yeah. I know.
I haven’t written in ages…sorry.
But we’re headed into “End of Year” territory, so I’m hoping to go back on the wagon. 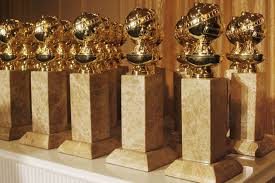 Golden Globes, all shiny and waiting to be handed out by the offspring of someone famous.

In the news today, the Golden Globe nominations were announced and now we just wait for Tina Fey and Amy Poehler to host what will be the greatest awards show this year.

Overall I don’t have a ton of complaints with this list. A few surprises, and a major snub (no Mad Men for Best Drama?? You replaced that with The Newsroom? Really??) but nothing else egregious.

I think this category above is the hardest one to decide. All amazing performances (so I hear about Django, haven’t seen it yet) so maybe this is the wildcard category this year?

Best Animated Feature:
“Rise of the Guardians”
“Brave”
“Frankenweenie”
“Hotel Transylvania”
“Wreck-It Ralph” (I know Pixar will have it in the bag, but I really loved Wreck-It-Ralph)

Television
Best Television Comedy or Musical:
“The Big Bang Theory”
“Episodes”
“Girls”
“Modern Family”
“Smash” (No, no, no. A thousand times no. Replace this with Happy Endings! The revolution has begun!)

More comments and thoughts as I digest…

Also, this list was stolen directly from the New York Times. Credit where credit is due.