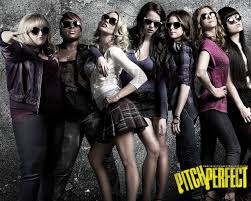 I apologize for the puns. I had to and when you see the movie you’ll know why.

Pitch Perfect is what Glee would be if it wasn’t trying ever so hard to be Glee. Great music mash-ups, funny characters who are actually funny, and even a little bit of heart. Pitch Perfect is the sort of fun Glee only wishes it could be.

But enough but that show. 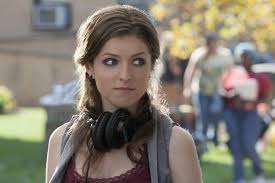 See how indy? She wears headphones, has piercings, and black eyeliner

The plot of Pitch Perfect is exactly what you think it is – and it would seem that is wholly on purpose and a nice little meta-nod in the film itself: the outsider chick who is deliberately shutting out the world ends up joining the a capella group along with a few other misfits and by showing them the way with her special brand of DJ’ing, leads them to success. Oh, and she get the cute/sweet guy in the end. None of these are spoilers, but how it all comes together is what makes the movie different from all the other rom-com, music based. And as good as Anna Kendrick (yes, the Oscar nominated Anna Kendrick is in this but hey, let’s remember she’s also in the terrible Twilight films) is as Beca, this movie is utterly stolen by Rebel Wilson as Fat Amy and Hana Mae Lee as Lilly.

Hana Mae Lee’s Lilly is painfully quiet with long black braids and a penchant for whispering instead of talking. Except what she whispers tends towards the psychotic. Starting fires is the least of it. Of course she bursts out at exactly the right moment, but that moment feels earned and right rather than out of the blue and total shock. 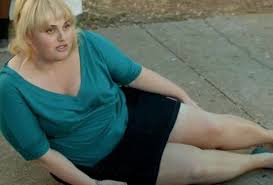 And Rebel Wilson’s Fat Amy? What needs to be said about Rebel Wilson that we don’t already know? She is fantastic. She embraces who she is and all of her fabulousness and you never feel like she doesn’t really believe she is as amazing as she says she is. She doesn’t question for a moment that she a the kickass singer and dancer, will happily turn down a douchy guy without thinking she has to settle and knows the value of friendship. Plus she belts out a mean tune.

Outside of the aca-singers, Elizabeth Banks and John Michael Higgins embrace the Christopher Guest theory of announcers (see Fred Willard in Best in Show) and treat you to a slew of utterly random, offensive, and hilarious statements. The one I’m quoting lately? “Nothing makes a woman feel more like a girl like a man who sings like a boy” Banks shows us that Effie Trinket is really just the edge of what she can do. And yes, Nikki Finke, beautiful women can be funny.

I suppose I can’t not mention the movie’s propensity towards … bodily fluids. One in particular get some very  serious screen time. After Bridesmaids I think we should all just be taking such things in stride, even if they aren’t really our cup of tea. Those scenes are over soon and you get back to the good stuff.

And much like Bridesmaids, getting the guy isn’t the end all be all – making good with your friends is just as important. Needing friends and being there for said friends is as much of a goal as getting a mate. But of course, it’s still nice to get the guy. Even when it’s the girl who has to prove herself for a change.

But I know what you’re thinking? What about the music? Has the Glee-ification of popular music made it impossible to appreciate some down and dirty remixes and aca-awesome singing? Thankfully no. Sure you might be bored of “I Saw the Sign” but that is intentional. Just take a look at the famous “riff off” between the various a capella groups on campus:

See? Fun. And the final numbers are even better, giving you that little thrill in the pit of your stomach that you expect from a great musical. For those of us who still get a thrill from “Don’t You Forget About Me” at the end of The Breakfast Club, you are in for quite a treat. Much like Judd Nelson you will want to thrust your fist triumphantly into the air by the end.

Pitch Perfect had a great first weekend and is going wide on Friday.