The first thought I had about Room 237 was “Wow, these people have a lot of time on their hands.”

My second thought was “Wow, these people are INTENSE.”

My third thought was “I kinda admire them in all their crazy crazy intenseness.”

Because it is crazy. Just insane. But there’s also a sort of genius.

Now, I have to be honest: I don’t particularly care for the movie. I read the Stephen King book first and was fascinated by it. The way Jack Torrence, an essentially decent husband and father with a decidedly undecent alcohol problem, is destroyed by this evil hotel was an incredible story. Much like King, I felt that the casting of Jack Nicholson was the first mistake that Kubrick made; there was no incremental trip to madness – Nicholson’s Jack was a mean jerk from the very start. And don’t get me started on Shelley Duval’s utterly ineffectual and insipid Wendy.

So I do come to this documentary with my own set of baggage.

However, even I can see the seduction that The Shining holds for the right person. All you need to do is watch that opening, the little yellow car, climbing higher and higher in the Colorado mountains, the Dies Irae ringing in the background…the movie can draw you in. In fact so many of the documentary’s never-seen-only-heard-narrators talk about that opening scene and how it changed their lives.

Assuming that every frame of The Shining has a secret meaning put there deliberately by Stanely Kubrick,  there is a special group of people who watch, and rewatch, then re-rewatch the movie, both forwards and backwards. These uber-fans have decided that this movie cannot simply be a retelling of King’s brilliant horror novel about an epic evil that lived in a sprawling hotel in Colorado.  To this select group, Kubrick’s version is a testament to the glory of film in telling multiple stories, using visual and audio cues to reveal a secret to those willing to discover it.

And who wouldn’t want to think themselves worthy of discovering those hidden meanings?

At times these conspiracy theories seem almost rational – the movie tells the story of the genocide of the American Indian by the United States and the Westward Movement. Thinking about all the American Indian artifacts and decorative touches throughout the hotel, plus the statement that the Overlook was built on an Indian burial ground – a fact that was not remotely in the novel – and you kinda, sorta buy it.

Other theories aren’t that plausible, though to hear those disembodied voices of the throngs who have a fervent need to publicize these conspiracies, it is almost possible to get caught up. 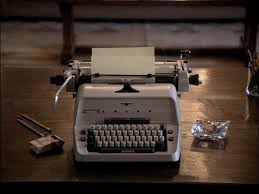 Look, it’s a German typewriter! Just like the Nazis used!

Is it a stretch to say that The Shining is really about the Holocaust because the number 42 appears frequently, and because Jack Torrence uses a German typewriter? Let’s be honest, yes. It is an incredible stretch. But the man who believes this, sells it to you in absolute faith. 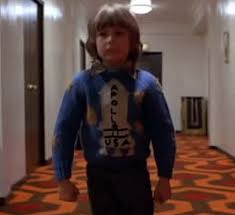 This sweater = no moon landing photos?

Is it even harder to believe that The Shining is really Kubrick’s way of telling the world he helped fake the photos of the moon landing? Yes. (NOTE: This theory posits NOT that the moon landing itself was faked, the author of this idea says probably did happen, but that the actual photos we use as proof were created by Kubrick in a soundstage). Are shots from Kubrick’s own 2001:A Space Odyssey enough to sway? Ehhhh, that’s really pushing it.

But while Room 237 allows these Kubrick devotees the space to prove their interpretations, as silly as they might seem, it also opens up the world of movie criticism. So what if Kubrick didn’t mean 95% of what these people are saying. He made a dense  film that allows the viewer to wildly theorize about what all that layering might mean. As with any meaningful work of art, the meaning lies in the viewer as much as in the artist. And Room 237 and The Shining show that in spades.

The documentary itself is well made. Scenes from The Shining are interspersed with other Kubrick clips – primarily 2001 and Eyes Wide Shut. Careful maps and diagrams help translate the mad imaginings of the unseen narrators, and occasionally – as with the Impossible Window in Stuart Ullman office – help prove a solid point. And while you as the viewer might find a moment to snicker or guffaw at any of these theories, the director Rodney Ascher never does. It’s unclear if he agrees with them, or merely wants to give them the respect they deserve for their utter devotion and scholarly efforts. I applaud him for that.

Map of the Overlook, including the Impossible Window – a window that looks outside…but in reality should only look out into a hallway

However, when Juli Kearns starts explaining how a poster that advertises skiing is a really a poster of a minotaur (and exclaims that the nearby poster of a cowboy is absolute proof), I’m not so sure I could always be as kind. 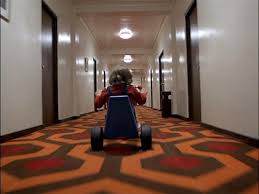 Still, the documentary is worth seeing if you are a fan of The Shining, of conspiracy theories, or of the fact that there are 101 ways to see a movie. All the ideas and proofs can be dizzying, but just take it all with a grain of salt and you’ll find your way back out of the maze.

1 Response to Room 237 – The Shining Conspiracies