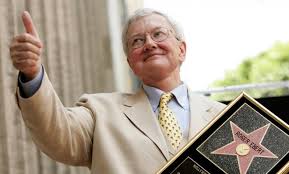 A big thumbs up. Always.

It’s hard to put into words exactly why the passing of Roger Ebert has been so difficult. I didn’t know him personally. We never exchanged an email or even a tweet. And he certainly had no clue who I was. But all the same, it has been like losing a friend.

For most of my life, I have been a huge movie fan. I have been known to see 3 movies in one weekend. Sometimes 2 in one day – even legally! And throughout this whole time, movie criticism has been a vital part of the process.

I was essentially weaned on movie criticism. My mother was the one who raised me on films and musicals, and always saw it as her duty to incorporate a critical eye into everything. I have very distinct memories of her reading me the latest movie reviews from The New York Times. Of course, this was always paired with the latest episode of At the Movies, or whatever iteration Gene Siskel and Roger Ebert were up to at the time.

When I even think about the concept of a movie review, my mind immediately goes to that image of two older men – one chunky in glasses, the other balding – and intensely heated conversation. Siskel and Ebert taught me at a very young age that movies were something you got excited about, that movies were something you discussed and examined – even the really really bad ones deserved that treatment. Far from mere escapism, movies were an art form. They gave us something beyond entertainment, though a really great flick that entertained was worth its weight in popcorn. By listening to Siskel and Ebert, I learned how to watch movies and make connections to other movies I had seen, stretching out the entirety of film history as I watched.  They also showed me that it was OK to enjoy something terrible, even if your best friend thinks you’re an idiot for doing so.

After Gene Siskel died and Ebert lost his sparring partner, I was amazed at how Ebert kept it going.  I think he really never fully recovered from Siskel’s death, if his posts and tweets around the anniversary of Siskel’s death each year are any evidence. And then once cancer took away his ability to speak, Ebert amazed me even more as he took to the internet and any other workable medium to make sure his voice would still be heard. He, along with his wife Chaz, soldiered on and making him more prolific than before. Even after years of reading his reviews and listening to him debate on television, I really felt like I “got” who Ebert was once I started following him on Twitter and reading his blogs. He was open and brutal and funny in a way that for some reason always surprised me. He could be foul-mouthed when angry, cutting when pissed off, and generous when sharing his reach with other reviewers. Ebert’s distinct voice was stamped all over everything he did.

He was a vocal opponent to the 3D movement, gleefully pointing out all the issues and visual problems with this new form. He was open about his opinion that video games weren’t art and while I don’t think he ever changed his mind, he was willing to read anything that might show him otherwise. He shared every single entry he made into the New Yorker Cartoon Caption Contest. And he wore his political views on his sleeve, loudly denouncing any injustice he saw in the world.

More than anything, what Roger Ebert showed me was that it was OK to love movies. Love them unequivocally and passionately and openly. His epic reviews of utter failures were evidence of that as much as his reviews of instant classics. I didn’t always agree with him and more than once got angry that he disliked a movie I adored, or conversely loved a movie that I thought was garbage. But his reviews always seemed to me to be open-ended; he had his opinion, but he left room for you to have yours.

It was a shock to hear that he’d died having read his blog entry about taking a “leave of presence” just 2 days earlier. This was not a man who was packing it in and ready to go to the big movie theater in the sky. He was excited about branching out, about tackling new things and new areas, and mostly about only reviewing the movies he wanted to review. I’d like to believe that he saw an infinite stretch of movie brilliance ahead – dramas that surprise, comedies that don’t insult, thrillers that innovate. And I’d like to believe now he’s sitting in that balcony once more with Gene Siskel and the two of them are debating all the movies they never got a chance to, enjoying each other’s company again, maybe with a few pointed insults along the way.

So, Mr. Ebert, thank you for memories, and yes, I will see you at the movies.

Pop culture addict. Reading enthusiast. Music lover. Occasional believer in the city of Atlantis.
View all posts by ilmozart →
This entry was posted in Movies and tagged at the movies, entertainment, gene siskel, Movies, Roger Ebert. Bookmark the permalink.