How I Met Your Mother will end next year 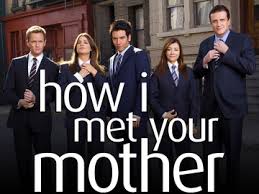 I’m so glad CBS listened when the entire internet begged it to let How I Met Your Mother go off into the sunset, its honor and integrity still mostly intact.

It was announced today that CBS has renewed HIMYM for the 2013-14 season and that will be its 9th and final season.

This is good on many levels:

1. All the leads are free to pursue other things, which is great as long as this doesn’t mean we’ll be getting more Smurfs sequels.

2. We have an end date by which we will FINALLY know who the titular mother is.

3. With Barney and Robin’s wedding later this season, how many more story lines are there to tell, apart from the reveal of the mother? Do we need more trumped up drama just to fill an episode? (The answer, by the way, is no)

4. They can start planning now to give us a series finale that will be satisfying  if not  a little bittersweet. HIMYM has excelled in giving us humor with some real emotional moments. Like Scrubs before it – because I am only counting Scrubs episodes until JD left – I hope we get a finale that ties up loose ends, looks forward to the future, and respects the world it created. For those of us who have hung on this long, I think we want something that is at its heart true to the core of the show.

And we have a few things to look forward to apart from the mother – primarily…the final slap. I’d even be happy with a secondary Slapsgiving episode, just because.

I’ll be sad to say goodbye, but I’m glad the show will end gracefully and on its own terms.

Plus, we’ll always have the mall.