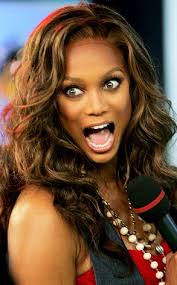 America’s Next Top Model season 153 aired last night. Did you know that? I didn’t. If my DVR wasn’t automatically set to record new episodes (it’s a guilty pleasure, leave me alone), I still wouldn’t have known.  And clearly I’m not the only one.

According to TV By the Numbers, rating for this season’s premiere are way down.  Way down like 45% down from its spring 2011 premiere.  The CW has apparently been having a soft season in terms of ratings in general, but ANTM was a bit of an old war horse. People loved watching Tyra put on crazy outfits and even crazier accents, create new words, and tell emaciated young women that they just didn’t know how to “walk”.  Has the public finally tired of all these riches?

Personally, I felt there was absolutely no marketing for this season. While I’m not a huge CW watcher – pretty much Supernatural and that’s it – you’d think I would have seen something somewhere that would have had me chomping at the bit for this new season.  Granted the show has gone down in quality, especially after the weird finale last season where Angelea was somehow just sent home before the final judging without any explanation.  The loss of Andre Lyon-Talley and his dreckitude is a blow, considering his Vogue pedigree gave the show some class.

It remains to be seen how this season of ANTM pans out. I’ll be watching, but wary.