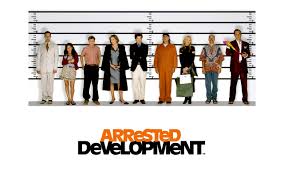 With just a few days left before Netflix unleashes new Arrested Development episodes upon us, the interwebs have been a-flutter with lists, interviews, essays, videos, and anything else they can think of that would relate to AD.

Yes, we are all really that excited.

The sheer volume of stuff out there to peruse and read through before 12:01am May 26 can make you dizzy like the side effects from one of the drugs pushed by Dr. Fünke’s 100% Natural Good-Time Family Band Solution. So I thought I would share my favorite links and videos over the few days, to help cut down on the noise.

First, Vulture’s surprisingly difficult Arrested Development Superfan Quiz. By sheer luck and a heck of a lot of guessing, I got 50/50.  As you go through it, I will emphasis the sheer luck and guessing.

Then, an amazing supercut of all the comments about Ann Bland Egg Paul Veal and all the “Her?” statements in general. When you see all of Michael’s reactions put together, it’s amazing. And you forget how that “Her?” was used in some other choice situations.

Next is a list from Uproxx of the 20 most obscure pop culture references in AD. Some of them I knew, some of them made sense in retrospect, and some were highly educational – especially Buster’s plaintive cry of “I’m a monster!” (Which incidentally I say to myself on a semi-regular basis. I do have both my hands, FYI)

I just blue myself for nothing

Then a nice little piece from Esquire about why Tobias is the heart and soul of the show. I don’t know if I would necessarily go that far, but he is one of my favorite characters, if not merely for the creation of the position of “analrapist”. Plus the images of him with his failed hair plugs are a thing of beauty/horror.

Finally for today, one of the AV Club’s many, many, MANY pieces on Arrested Development.  I choose this one for the sweet comfort of all the quotes and how they can be used to respond to the new episodes. How meta.

In closing…there’s always money in the banana stand…