In which I review Baz Luhrmann’s The Great Gatsby

Have you seen Moulin Rouge?

Do you want to see it on the big screen again?

If you answered “yes” to these questions, then by all means, go see The Great Gatsby.

However, if a “no” crept into your mind at all, I would save the $12 and the possible headaches from the unnecessary 3D.

I should probably say that I loved Moulin Rouge when I first saw it. It was something I’d never quite seen before, the colors, the music, and visual fireworks…it seemed magical. It was easy to get swept up in it all and allow myself to be absolutely and completely dazzled.

The thing about that sort of magic is that it doesn’t always work the second time around. And clearly that is the case with Gatsby. 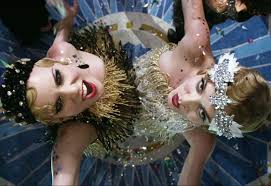 I should also probably say that although I’ve read F. Scott Fitzgerald’s permanent reading list contribution, I remember almost nothing. It’s one of those books that I know should have had a larger impact on me, but just didn’t.

(Side note and True Story: when I was in 7th grade I had to read Of Mice and Men. Being the last minute worker that I am, I waited until the night before and decided that with only a few pages left, I didn’t really have to finish the book to know what happened. When my mother and I sat to talk about what I was going to write about the book, I expressed sincere shock when she mentioned that Lenny died. She then sent me back to my room to reread the ending of the book. It’s amazing what a few pages at the end of a book can do)

Note: From here there be spoilers…

What this all means is that I came into Gatsby with minimal preconceived notions. I knew that the book ended with Gatsby floating face down in a swimming pool a la Sunset Boulevard, and that someone got hit by a car. But that’s about it. So I my mind was pretty open as the movie started.

It then snapped shut almost immediately.

The first hour or so of Gatsby is Moulin Rouge Part 2: The Rougening. And I really wish I were joking. Everything from the pacing to the camera angles to the voice over made me feel like I was back watching Luhrmann’s other film that featured anachronistic music and flashy costumes and a doomed love story. It wasn’t that it was bad – it was gorgeous to watch and the music was pretty good; it’s just that I’ve seen it before. And as I said, the second time around it all loses something. 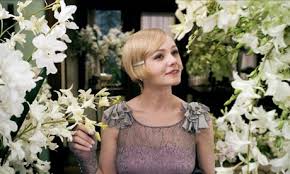 My other problem with the film is that it tried so hard to make the focal point the doomed love story between Daisy and Gatsby, without really delving into the class issues and social issues going on behind the scenes. Just because Leo is in this, the movie doesn’t need to be a sequel to Titanic – and it shouldn’t be. And as I start to vaguely remember some of the issues in the book, I realized why I had such an issue with Daisy — don’t give Daisy depth just because you can’t figure out how to make her character worthy of a lifelong obsession. Carey Mulligan did a fine job with what she was given, but what she was given was a very strange interpretation of the character. 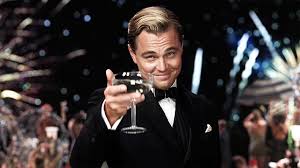 Nice to see you, Old Sport

I will say that Leonardo DiCaprio was fantastic. He captured everything you wanted Gatsby to be – dashing, charismatic, with the odd insecurities befitting his background. Leo is no longer that fresh faced young adult who won the hearts of all the teeny-boppers as he sunk to the bottom of the ocean. His body has filled out, he has developed lines on his now non-angular face. But this has just made him more appealing; looking like he’s actually been living a life gives him more depth.

Joel Edgerton was also great as bully and bigot and racist Tom Buchanan. Newcomer Elizabeth Debicki is also great as Daisy’s pal Jordan Baker. Tobey Maguire’s Nick Carraway did nothing for me. I find him too weak to really make an impact on me. Even as he yelled and raged at the end, I just found him wanting.

So should you see Gatsby in the theaters? If you were interested in seeing it at all, and of course answered yes to any of those Moulin Rouge questions, then go see it and definitely see it in the theaters – if for nothing else than the amazing sequence in which we are actually introduced to Gatsby himself, pomposity at its greatest. But if you were on the fence and weren’t really all that motivated in the first place, I wouldn’t rush.

In the end, this version of The Great Gatsby is a 2 hr 20 minute movie that feel like a 2 hr 30 minute movie.