I hate myself for posting about Snooki 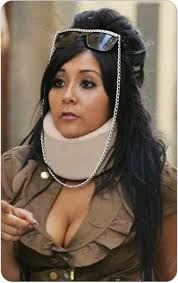 So yeah. I watch Jersey Shore. Wanna make something of it?

To be fair, it was my cousin who got me into it. I happened to be hanging out at her house when season 3 was premiering and because if there is a TV in the room and it’s on I’m watching, I watched.  I found every single person on that show absolutely despicable with no redeeming qualities whatsoever.  Two seasons later I’m still watching.

When the interwebs started reporting a couple of months ago that Snooki was preggers, I didn’t really give a crap. How exactly would this effect my life again?  I don’t know her, it’s not like she is going to be calling me to babysit her offspring.  Plus, how often does the interwebs get it right?  She even went out of her way to deny said rumors.

However, today it really does seem like Snooks is knocked up.

Is this the final box to check off before the Mayan apocalypse takes place (it is 2012 afterall)?  Does this mean the end of Jersey Shore as we know, since surely Snooki won’t be getting fall down drunk with her panties around her knees now that she’s about to become a mother? Will the other “ladies” of the house follow suit, and we’ll be hearing shortly about  JWoww, Deena, and Sammi getting pregnant too so they can all throw up from morning sickness in unison? One can only wonder…in horror.

3 Responses to I hate myself for posting about Snooki